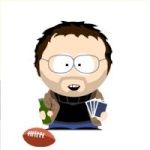 This expansion includes new corporation cards as well as new "prelude" cards. Stronghold's Stephen Buonocore explained that each player would begin the game with four prelude cards — possibly acquired via drafting, but I can't recall the details right now — and each player would choose two of them with which to start in play, discarding the other two. Thus, each player has more differentiation from the get-go, leading to more variability from the first round on.